14 months? So much has happened and I forgot to tell you all about it.

OK, so I am a horrible blogger. I started this site thinking that it would be a great way to keep friends and family updated on the progress of our construction. I had every intention of posting at least once a week, with pictures and updates on the trials and tribulations of our project. So here it is, 15 months into our barn build, 14 months since my last post, and I haven't done a good job of keeping you up to date.

So to bring you up to speed, we are about 95% done with the barn. We only have the siding and hayloft doors to finish up on the outside, and on the inside we just have the staircase and flooring to contend with. We are thinking this will be done by Thanksgiving.

I am interested in picking this blog back up and writing in more detail about how our barn build went. We are also deep into planning the house, so there is lots to talk about there too.

We started construction on the barn over the past few weeks. Here's what we've been able to accomplish so far...

1. Cleared the land where the barn is being built.
2. Dug out for the foundation.
3. Installed a perimeter drainage system.
4. Hired a contractor to put in the footing and foundation.
5. Filled in the foundation with stone and back-filled the outside of the foundation.
6. Started framing the first floor.

Here are some pics of our progress...
http://s1208.photobucket.com/albums/cc367/shanjust/Barn%20construction/
Posted by Shannon & Justin at 11:04 AM No comments:

The Rain Has Finally Stopped

With the plans approved, we can really get started anytime we're ready. We have to at least do something within 6 months of the permit being granted. What we really have been waiting for is the rain to stop.

There is an area that we have to cross to get from the driveway to the shed site. Eventually the driveway will extend over to the shed, but for right now it's just a "field". In reality, it's an area where the previous owner logged the land and stripped the land of all vegetation and dirt. It's basically pure ledge. If there is any dirt, it's only an inch or so thick. So, with all the spring rain we had, and because there is so much ledge, giving the water no where to go, it's just a mud bowl.

We'll have to bring in fill to build this area up if the permanent driveway runs through it. In fact, we had plans just last weekend to start to bring in materials to do just that. Our plan was to get a temporary driveway in so that we could get concrete trucks over to the shed site and get going on the foundation. But then, of course, we ran into a problem.
Posted by Shannon & Justin at 8:19 AM No comments:

We've had some good news and some bad news lately. What I consider the best news is that the shed plans were approved. Initially, the town was not willing to approve the plans for us to build a shed first, because it's "customary" to build the primary residence first and secondary structures later. But we were able to work with the local officials and get approval.

And, the actual plans themselves were approved. I think what I sent them was overkill in terms of details. But by producing a document with a ton of detail, it will make developing our materials list a breeze.

Also with the approval of the plans, we were assigned an address. Our neighbors to one side are #328, and the neighbors to the other side are #370. There are three lots between those two houses, so we knew our number would be somewhere in the middle of those. We requested two numbers: 360 and 342. We wanted 360 because then we could say, so matter where we go, we can just do a "360" and be back in the same place (goofy - I know). And I wanted 342 because those were the last 3 digits of my grandmother's phone number. Well, the building department gave us #350. I'm not quite sure why I couldn't have one of the numbers I wanted, but that's not a battle worth engaging in.

More about the bad news a little later...
Posted by Shannon & Justin at 8:09 AM No comments: 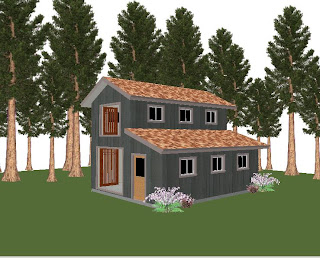 During the cold, nasty winter New England weather, we've been working on our shed plans. We've decided that the main project for 2011 will be to build the shed. There will be other things to do of course, but that will be the main goal.
We are planning to build a "monitor style" barn with one wing. I found a great set of plan in a book about building your own barns. Our goal is to have three areas: parking for a rider lawn mower and tractor, a workshop area, and a storage area. The plans we chose fit that bill perfectly.
We are planning to do all aspects of building the shed ourselves. So over the winter, we are getting our plans on paper. These are plans that we will submit with our building permit. It has also forced us to investigate what building materials we will use and the steps involved. It is also helping us develop our budget.
We know the first things we'll have to do is clear the building site and dig the foundation hole. But to do that, we have to buy a machine (tractor). Justin has been doing research on what machine will best suit all our needs. I think he's narrowed it down quite a bit, and has been looking online for one. So once we buy that and spring comes, we can get started.
I'm excited to be doing this ourselves. I've taken on the responsibility of developing the blueprints and creating a materials list. I have never done any framing (except building a dog house - which came out great by the way), and after all the research I've done, I think I can do this.
Posted by Shannon & Justin at 12:57 PM No comments:

It's Getting Too Cold To Work Outside

I think this weekend will be the last that we spend up at the land working outside this year. It's now mid-December in New England and it's getting pretty cold. We've had some single digit temps in the evenings and a few days this past week never made it out of the teens.

We're really happy with the work we have accomplished this Fall. We've cut down a number of trees at the house site. It's a much safer working environment now. We have also come close to a final decision on where precisely the house will be located.

There are many things we can do over the winter, such as talk to the appropriate people about the septic design, finalize house plans, start identifying sources for building materials, and find a machine that will suit our needs.
Posted by Shannon & Justin at 3:15 PM No comments:

My father in-law sent me this email joke today about tools. I thought it was pretty funny. Let's hope we learn the proper way to use tools for our upcoming projects.

DRILL PRESS: A tall upright machine useful for suddenly snatching flat metal bar stock out of your hands so that it smacks you in the chest and flings your beer across the room, denting the freshly-painted project which you had carefully set in the corner where nothing could get to it.

WIRE WHEEL: Cleans paint off bolts and then throws them somewhere under the workbench with the speed of light . Also removes fingerprints and hard-earned calluses from fingers in about the time it takes you to say, 'Oh sh--!'

PLIERS: Used to round off bolt heads. Sometimes used in the creation of blood-blisters.

HACKSAW: One of a family of cutting tools built on the Ouija board principle... It transforms human energy into a crooked, unpredictable motion, and the more you attempt to influence its course, the more dismal your future becomes.

VISE-GRIPS: Generally used after pliers to completely round off bolt heads. If nothing else is available, they can also be used to transfer intense welding heat to the palm of your hand.

OXYACETYLENE TORCH: Used almost entirely for lighting various flammable objects in your shop on fire. Also handy for igniting the grease inside the wheel hub out of which you want to remove a bearing race.

HYDRAULIC FLOOR JACK: Used for lowering an automobile to the ground after you have installed your new brake shoes , trapping the jack handle firmly under the bumper.

BAND SAW: A large stationary power saw primarily used by most shops to cut good aluminum sheet into smaller pieces that more easily fit into the trash can after you cut on the inside of the line instead of the outside edge.

TWO-TON ENGINE HOIST: A tool for testing the maximum tensile strength of everything you forgot to disconnect.

PHILLIPS SCREWDRIVER: Normally used to stab the vacuum seals under lids or for opening old-style paper-and-tin oil cans and splashing oil on your shirt; but can also be used, as the name implies, to strip out Phillips screw heads.

PRY BAR: A tool used to crumple the metal surrounding that clip or bracket you needed to remove in order to replace a 50 cent part.

HOSE CUTTER: A tool used to make hoses too short.

HAMMER: Originally employed as a weapon of war, the hammer nowadays is used as a kind of divining rod to locate the most expensive parts adjacent the object we are trying to hit.

UTILITY KNIFE: Used to open and slice through the contents of cardboard cartons delivered to your front door; works particularly well on contents such as seats, vinyl records, liquids in plastic bottles, collector magazines, refund checks, and rubber or plastic parts. Especially useful for slicing work clothes, but only while in use.

SON-OF-A-BITCH TOOL: (A personal favorite!) Any handy tool that you grab and throw across the garage while yelling 'Son of a BITCH!' at the top of your lungs. It is also, most often, the next tool that you will need.
Posted by Shannon & Justin at 2:15 PM No comments: